​This beautiful photograph is taken by Jen Downer. Portland friends, HIRE HER IMMEDIATELY.

I like it when things happen effortlessly. When the stars align and the universe conspires and it all just flows with ease and grace.

But mostly it feels like I’m trying to get into my car in the parking lot and my keys WON’T WORK and then I realize holy shit, that’s not even my car.

From the outside, it appears that the people around me are birthing big new things one after another without even breaking a sweat. Every damn minute, More Impressive Things– taking the trip of a lifetime, moving into a new house, launching a famous podcast, getting another book deal, making history, running for office– just being generally fabulous.

Whereas I still have 84 socks in my house with no match.

It’s easy to feel like the world’s biggest loser.

But I want to let you in on a big secret. Even some of your BONA FIDE HEROES sometimes feel like life is too impossibly hard and they are total loser wimp failures who cannot possibly keep it up.

You see, as I’ve had the privilege of working with some incredible women over the years, I’ve seen that even the most splashy “overnight success” stories were years in the making. Change happens slowly, almost invisibly, growing in the dark until the new growth reaches critical mass and something brand new finally breaks through for the world to see. ​

And even after that big breakthrough moment, change and growth continue. Even the most triumphant rock stars face new challenges and opportunities as they move up the spiral, and each time they’re back in the mud, figuring out this next level until they break through again.

In fact, I’d say that this is how MOST big change happens– painstakingly, maddeningly, infuriatingly slowly.

I hate this so much. Why can’t we just see something that needs to be changed and –poof!– change it? This is how I wanted the US election to go– hurrah, humanity prevails, and instantly we’d have commonsense gun laws and sanity restored to our government! But instead there was heartbreak, and yet another mass shooting, and outrageous voter suppression in Georgia, and then on top of it all, Ruth Bader Ginsberg fell and had to go the hospital.

I was so sad and angry.

But friends, an immense sea change DID happen in that election. We saw momentous, historic changes that will have far-reaching effects over the coming years. But it was that maddening, infuriating kind of change– two steps forward, three steps back, and a giant stagger forward through the mud.

This kind of change is so excruciatingly slow that it makes me want to pull my teeth out. But damned if it isn’t just how things work.

So here’s the thing. I’m about to tell you about a BIG change I’m making in my life.

It might seem sudden, or out of the blue, but in fact it has been years in the making. It’s been building and building inside me, until it’s come to the tipping point where it’s time for it to break through and for me to share it with you.

So let me tell you a story.

From the time I was a sassy little kid and too big for my britches, names have always mattered to me. I hated that in my evangelical world, “God” was always referred to as “He.” No matter how much everyone told me that didn’t matter, it mattered to ME. “Well God isn’t male, honey, He’s beyond gender. Oh, but we would NEVER refer to Him as HER– no, honey– well no, we just WOULDN’T.” Yes. It mattered.

I remember being livid and full of despair when I learned that only women– ever, as far as I could see– changed their last names when they got married. In my mind, I saw a picture of the bride being erased, just being absorbed into her new husband. (Which hey, guess what, is quite an accurate representation of how it legally worked for centuries.)

So when I got married at 21, even though I was still a virginal super-Christian, I refused to take my husband’s name and instead we BOTH hyphenated our last names. It was a huge pain in the ass every single day and I was mocked unceasingly, but it was absolutely WORTH it to me because of the symbolism.

When we divorced and I reverted to my original name, I swore that was it. I’d never change my name again. Not for any reason. Never, no never.

In fact, I was so attached to my maiden name that I made a deal with the father of my oldest daughter when I was pregnant with her. “If it’s a girl, she’ll have my last name,” I said. “If it’s a boy, he can have yours.” Yep, I really was that sure I’d have a girl.

{ { Incidentally, just as a little side note, here are some other things I also declared I’d never do: have kids, live in the suburbs, watch some show called Sex In The City, read that silly kids’ book about wizards, and remarry. } }

Yes, the universe is laughing at me right now.

For years, I’ve felt a special and secret connection to the name Katherine. It was the name of the protagonist of my favorite novel as a teenager, and it hovered nearby like a wispy alter ego. I used it for characters in the short stories I wrote in college, it was my top-secret password for years, and sometimes I doodled it in my journal. I never told a single soul about this.

Early on in our relationship, Nick said to me offhandedly, “Do you ever feel like you have an alternate name?” (Which, upon reflection, was probably an opening to a talk about identity and perhaps gender…but instead, this happened.)

“Uh, I don’t know,” I hedged, because even though we had talked about past lives together and I told him I really loved being dragons and trees together and he said he hated being a tree and would never ever do it again not even for me, I still didn’t want my new love to think I was…weird.

“Because sometimes I feel like you have this other name,” he said.

“Oh?” I was being casual but inside a storm was brewing. Well I certainly cannot tell him that my other name is Katherine, what if he wants to call me some nickname that isn’t me at all? What if it’s HELGA? What if it’s HUNNYBUNNY?

“Look, I know this is weird. But I really just feel like your name is… Katherine.”

“No it’s definitely with a K, like Anne with an E.”

Then I went very still. ​All the chimes were chiming. There was a humming sound in my hands. Wait what?!?!?

And that’s when I realized maybe I should rethink the whole marriage thing.

Nick has called me Katherine ever since. True story.

And now? Suddenly-slowly, I’m ready for it not to just be this secret name we use in private. I’m ready to step into it fully and declare it. So, my dear kindred spirits, I’m changing my name to Katherine for the radical reason that it just feels like my true right name and makes me feel strong and vibrant and– I can’t think of a word other than– resonant.

When we got married, we discussed what to do about last names. We knew that Nick would likely change both his names, because of his gender transition, and because his last name was his married name. We thought it would be lovely to have the same last name; so poetic; but we didn’t like the poetry OR the politics of either of us taking the other’s. It was a conundrum.

“I wish we could just make up a NEW last name,” I said one night while we were doing dishes.

OH WAIT. We can do whatever we want.

So that’s what we’re doing!

Together, we are becoming the Norths.

I am Katherine North. He is Nick North.

It’s so lovely to meet you. 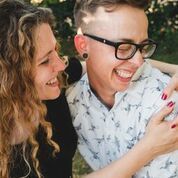 (This photo is also by Jen Downer!)

Isn’t this just like a fairy tale? It is!

And it’s also a colossal pain in the ass! The pile of paperwork and confusion and explanations is DAUNTING! I have had numerous people explain to me perfectly reasonably all the ways this is going to make life more difficult!

I’m telling you this part because I want you to know that this is how I make changes in my life. With mess, and overwhelm, and anxiety, and way too much paperwork. And that’s ok.

Every change is, at its heart, a declaration of hope in the future. It’s stepping away from a familiar shore believing that something better lies ahead. For me, it means betting on the fact that everything I create going forward under this new name will be even better than anything I’ve made until this point. It’s a leap of faith that everything I’ve done up until now was just my preamble. That there’s so much more that I’ll create as Katherine North that it’s okay to start over, even at 41. As the wise George Eliot said, It is never to late to be who you might have been.

So don’t wait for it all to line up perfectly and just flow. Don’t wait for the stars to align. Just own your truth. Say it out loud. Who knows? You just might speak whole new constellations into being.

And even when it’s messy and complicated and people think you’re weirrrrrrd, go ahead and take that big staggering leap forward. You’ll get mud ALL over you, I promise, and your heart might get broken a time or two, but you’ll also feel the universe humming inside you, the chimes will chime, and that’s the sound of the universe telling you: Dearheart, we’ve been waiting. THIS is how we conspire. Exactly like this. 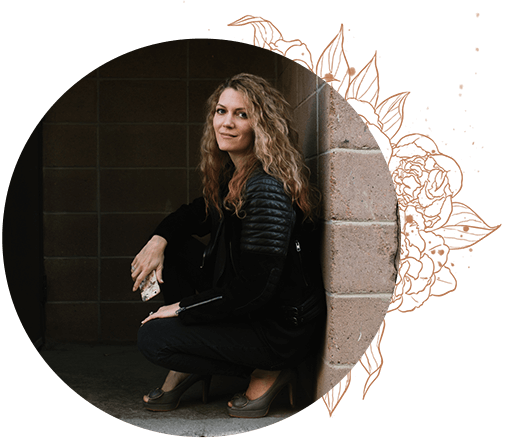